We believe that a solid and successful team starts with finding dedicated individuals who work and live by the core values of CLIENT SERVICE | INTEGRITY | TEAMWORK. From there we provide excellent training by experts in the field along with an amazing support staff to ensure you have all the tools necessary to be THE BEST at what you do.

We are excited to welcome new members on board!

Become part of the team

Cornerstone was born when a small group of passionate individuals came together with the same goal: To provide excellent service and exceptional financial products to the retirement aged community. We are proud to have grown into a team of 60+ representatives who work tirelessly to, not only meet but EXCEED the standards set upon the founding of this organization.

We come to you

Our 60+ Agents are available all over the lowcountry and upstate of South Carolina to visit you in the comfort of your own home. Scroll down to learn more about our management team or click at the bottom of this page to find a representative in your area. 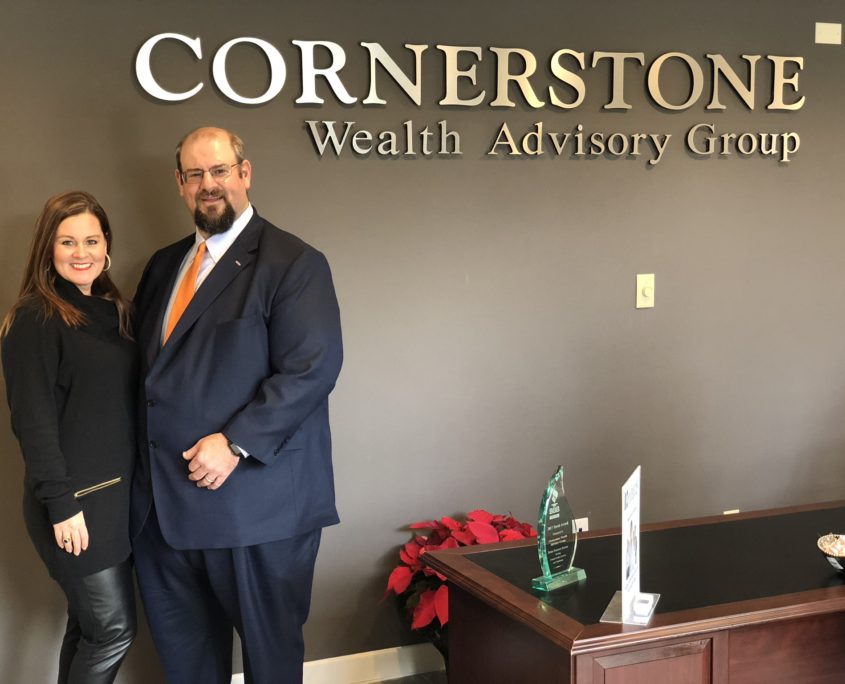 Michael Haskett, Founder, Chief Executive Officer at Cornerstone Wealth Advisory Group, a South Carolina native, has always had an interest in Business. His first experience in Financial Services was as a sales agent for ING Financial Corporation. He quickly worked his way up to the position of a supervisor and then Branch Manager. Soon after, an opportunity to work as a Branch Manager for Bankers Life and Casualty Company in Charleston, South Carolina led him to the Lowcountry. However, he still felt as though he was not using his abilities to his full potential, and, at his wife’s encouragement, he decided to move out of the franchise business model, and begin his own organization that would be mutually beneficial to financial advisors and clients. In 2007, he founded the Cornerstone Wealth Advisory Group with the dream of bringing the best retirement products to clients while also providing a competitive job market for his agents.

Mr. Haskett attributes his success to hard work, and to being surrounded by a great team. The success and efficiency of his business results in great team chemistry, where people are valued and empowered. By leading with kindness, compassion, generosity and respect, Mr. Haskett has created a team of industrious, fair-minded people who share his mission of doing the right thing. Mr. Haskett is pleased with Cornerstone’s growth and wishes to open an additional 20 branches of his business. He hopes to continue to provide opportunities for others to expand in the wealth advisement industry, and in addition, he is training his son who is nearing his college graduation to be the next generation of the business and continue Cornerstone’s legacy.

The Cornerstone Wealth Advisory Group is committed to helping the community through various forms of community service and outreach, in addition to the financial planning services they offer to their clients. It was lauded with the Large Business Torch Award for Ethics from the Better Business Bureau in 2017 due to its outstanding values. The company has served as a sponsor for Chase After a Cure, a local organization that funds children’s cancer research, donating a total of more than $25,000 and participating in fundraising efforts which brought in additional donations totaling more than $30,000. Cornerstone also donated office space for Chase After a Cure so that they could have a comfortable place to manage their organization.

Mr. Haskett was influenced by his grandfather, an immigrant from Greece who started his own successful company in America. Every year, Cornerstone awards the MG Miserlis Visionary Award, named after Mr. Haskett’s grandfather, to the person at Cornerstone who embodies the example of determination, hard work, innovation, and creativity that his grandfather set. In preparation for his career in business, Mr. Haskett earned a Bachelor of Business Administration in management and marketing and related support services from Clemson University in South Carolina in 1994. He has shared his knowledge with others by coauthoring “Baby Boomers Are Demanding More From Their Financial Advisors” as well as having his writing appear in Bloomberg Businessweek, Fortune and Money.

In 2018 Mr. Haskett was recognized by Marquis Who’s Who Top Executives for dedication, achievements, and leadership in finance and wealth advisement and in 2019 was awarded the Marquis Who’s Who Humanitarian Award.

April and her husband Aaron made South Carolina their home in 2005. April entered the workforce in Publishing where she was a copy-editor for the Wakulla news, a book editor and then a reporter and news writer for the Clemson Messenger and Seneca Daily Journal.

She was part of Cornerstone’s founding team in 2007 and has been the head of marketing and website development ever since. She and her family live on a small farm in Cottageville with their 3 daughters Adeline, Stella and Hazel. The family enjoys the great outdoors as well as participating in volunteer bible education work.

John lives in Charleston, SC with his wife Alissa and their dog Riley. He graduated with a Bachelor’s Degree in Business Management from Coastal Carolina University. In his downtime, John enjoys being outdoors, traveling, watching sports and spending time with his friends and family.

David Armbruster grew up in Atlanta, GA, graduated from Clemson University in 2000 with a degree in German and International Business. He currently resides in Mount Pleasant with his wife Patti and their two dogs. They are parishioners at Christ Our King Catholic Church and enjoy spending as much time as possible outdoors.

Scott and his wife Amy live in Charleston, South Carolina and have two children, Sebastian and Makinzie. Originally from Ohio, Scott has 17 years in the Insurance Industry.

Originally from Massachussets Matthew and his family are enjoying southern living in sunny Summerville, South Carolina.

Married to his wife Jaime, the couple are parents to their beautiful daughters Marissa and Taylor. Matthew enjoys playing Golf, and spending time with his family at the beach.

Angie and her family live in the Lowcountry of South Carolina. She is passionate about helping people find the best insurance coverage available!

Marty has 30 plus years of experience as CEO and CFO of privately and publicly owned businesses; involved in all stages of business development, project management, marketing, capital funding and financial reporting including Investor, Bank, Regulatory and SEC reporting.

He has also worked as a CPA with 8 years of Big 4 public accounting, tax and entrepreneurial services experience.

Marty is originally from New Jersey but now calls Downtown Charleston his home.

He is married to his wife Sharon who is also a CPA. They have two successful children; Adam, a CPA in Boston and Samantha, a surgeon at University of Michigan Hospital, and an MUSC Graduate.

Mary Jane and her husband Adam live in Summerton,South Carolina and have an Autistic son, Zak and a cat named Jency.

Mary Jane has over 11 years of experience in the Insurance Industry and enjoys spending her free time with her family and friends.

Joshua went to school for Business Leadership and Development with a minor in Human Resources. Josh enjoys seeing the Cornerstone Family reach their goals and in his spare time loves cheering on the Clemson Tigers!

James Graham is a Goose Creek, SC native who joined the Cornerstone team in early 2019. His primary responsibility with the organization is client database management.

April is a native of Summerville, SC, and a U.S. Navy Veteran. She is the proud mother of 3 teenagers: Kaitlyn, Miracle, and Samuel. In her spare time, she enjoys traveling, working with arts and crafts, reading, and participating in volunteer services and activities in her church. She is also an author. April is proud to be part of the Cornerstone Family.

Matthew Shaffer is one of Cornerstone’s Field Trainers. He loves helping his clients to find innovative ways to plan their retirement and to mentor other advisors in their journey to become excellent financial planners as well.

Norman started with Cornerstone Wealth Advisory Group in February of 2009 and quickly rose to one of the top agents in the organization. Through hard work, skill, adopting a mindset of putting his clients first, and doing what is in the clients best interest allows him to serve thousands of clients, including repeat and referral clients throughout his tenure.

Norman always takes pride and time in building relationships with each and every client to establish a long lasting bond with their entire family. He also uses his professional expertise to create a lasting family health and financial legacy for his clients.

Jim has been with Cornerstone since 2008 and currently resides on Daniel Island, SC. He enjoys helping seniors to plan and manage their retirement and his passion for helping others has moved him into a management position as a field trainer where he’s able to mentor those new to the industry. In his spare time Jim enjoys spending time with his wife and 3 children as well as playing and coaching sports.

Greg Greene joined Cornerstone in the fall of 2009. Originally from Florence, Kentucky, Greg and his wife, Tina, moved to Summerville in 2006. They love the weather, golf and the beach as well as spending much of their leisure time at their pool or entertaining their dog Lucy.

Cheryl has been with Cornerstone since 2011 and finds it very rewarding to help change the lives of those she works with. As a field trainer she’s also able to pass her skills on to those advisors she mentors. Cheryl enjoys spending time with her children and grandchildren.

Lynn came on board with Cornerstone in July of 2012.

Want to be part of the team?

Apply for a job now!

Cornerstone is always seeking talented and passionate individuals to join our team. If you’d like to learn more about becoming part of the Cornerstone family, click below to apply!